On june 2 in the night I left for a 3 flights + car travel to Vukovar, a city on the border between Croatia and Serbia, a place with tragic remembers. Although it has a long cultural history, it is most noted for its fate during the war in the early 1990’s in the former Yugoslavia and often called “The Hero Town”. It is the only town in Europe completely devastated since WWII. Whatching pictures and reading about those moments is hard.

In the last few years visual identity of the city is changed moving from the war focus by this and makes new, positive story related to street art and culture in general. After 2017’s Vukovart Street Art Festival that got 3D anamorphic paintings, city became so called Open Gallery. This year there was a new motto “Vukovart goes vertical”, with concept of painting five murals in Borovo neighborhood.

Artists were: Marina Capdevila from Spain with Raul, Ricky Lee Gordon from South Africa with David, Ella & Pitr from France, Croatian artists Chez and Sarme and obviusly me and Fabio Fedele from Italy.

When I got the invitation and knew the size of the wall (12×10 m) I decided to ask someone to work with me and I called Fabio who is my friend since 10 years but we didn’t paint togeheter (except once in the USA in a 3D crew). I showed him my sketch and the hard work that was expected in 1 week and he said yes (crazy man). We worked 7 days about 15 hours each day, except one morning cause of a big storm. It was exhausting, we had breakfast, lunch and some dinners also on the scaffold. But at the end we were empty and happy 🙂

On friday evening a big storm with lightings and thunders came with dark. I still was on the last floor of the scaffolding, stupid me, with many colors around. The structure was most in iron so I was really worried about be electrocuted…and the storm was growing. At the end the canche was only escaping throught a window, and I have to thank Filip for bringing me down by that. I was dripping wet and trembling.

Well, this is something I wrote on the meaning of the piece!

A giant red dressed woman is embracing a pelican. They both look at you.
The bird is a bit scared, she is serious. They fit with difficulty a dark narrow place similar to a box, closed up by two red belts or braces that contain windows. Her foot is ouside and the wings of the pelican come out on the belt, he is bigger that the place. The pelican has strange white light coming from the head, as abyss fishes, and this light makes the place green. Some wind is blowing from left. I tought to the symbolism of the mother pelican feeding her baby pelicans, a old legend which said that in times of famine, the mother pelican wounded herself, striking her breast with the beak in order to feed her young with her own blood to prevent starvation. There is another version of the legend that says that the mother fed her dying young with her blood to revive them from death, but in turn lost her own life. That’s why the pelican became soon a sign of abnegation, charity and resurrection (often a precise reference to Christ and to salvation).
I didn’t want to think to the war in Vukovar therefore that idea occurred (I tought to Hamlet too) and the action of taking care of the others in dramatic moments became the most important part of the painting.
My pelican hasn’t babies around to feed or to save. It is alone now but it is protected by the woman that is a surreal personification who saves the bird.
She takes care of who by definition is the self-denial symbol. That means preserve peace.
The light on the pelican for most of people belongs to a hideous creature of the dark abyss. On the bird it look like something strange abd make it a fantastic character who doesn’t exist on the heart. In abyssal fishes the lights is to attract prey. On the pelican is the way to introduce light in the dark box and to create a feelings between the bird and the woman, and to show us what is inside. Something scary seems to be also in the place but they are stronger if they are connected.

And a video made by VukovArt festival crew:

A video made with the drone by Raul:

We’d like to thank the city of Vukovar and his major for this festival, EmaPaškvan, Krešimir Herceg for the pictures, Mirolslav Hnatko and his wife, Siniša Mitrović and mostly our magic artist friend Filip Mrvelj, organizer and ‘angel’ (he knows why). Also, we want to thank all the people living in the building cause they have been really precious with us, especially the fantastic two Gasparovic, Marija Marinic (i felt crying when I gave her the last hug) and the Matusenski for all the cakes that made Fabio so happy and powerful 🙂 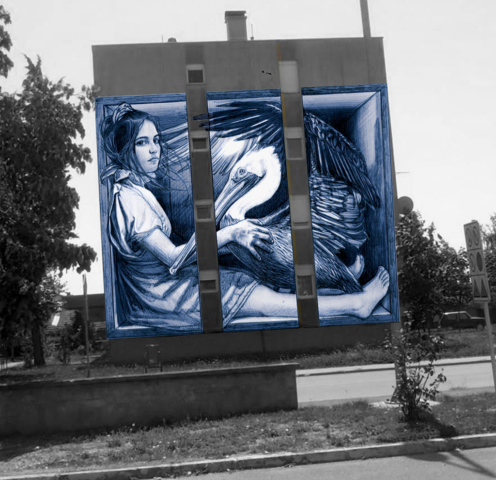 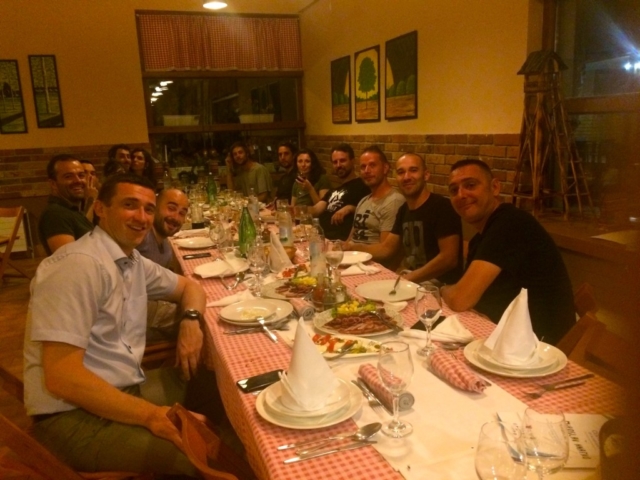 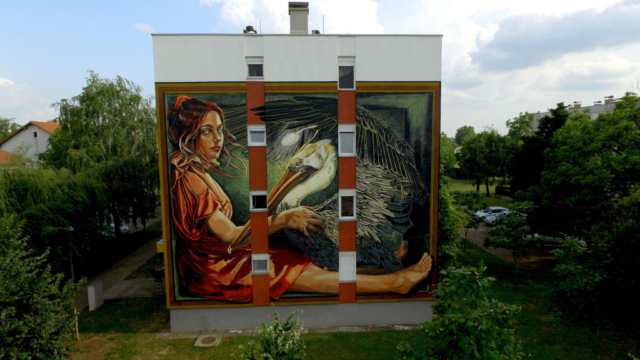 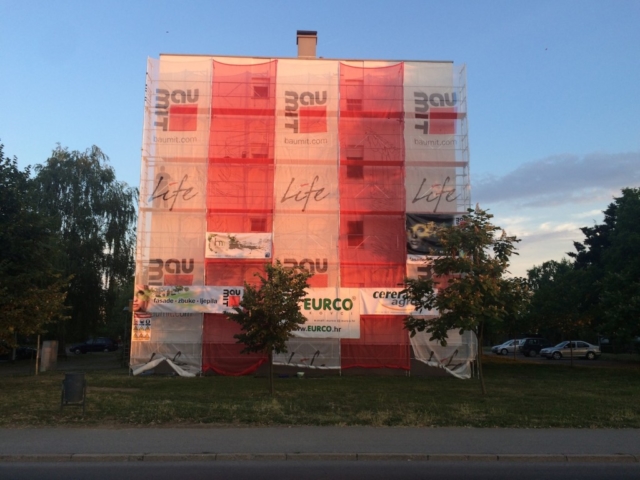 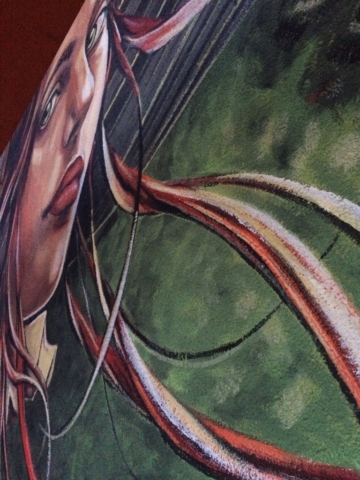 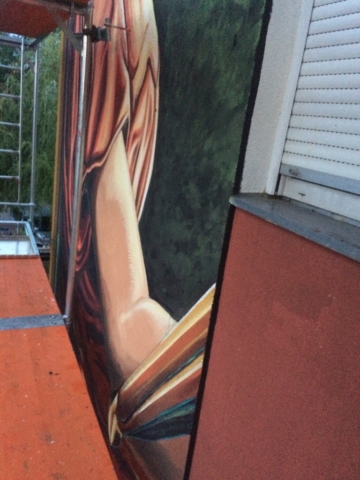 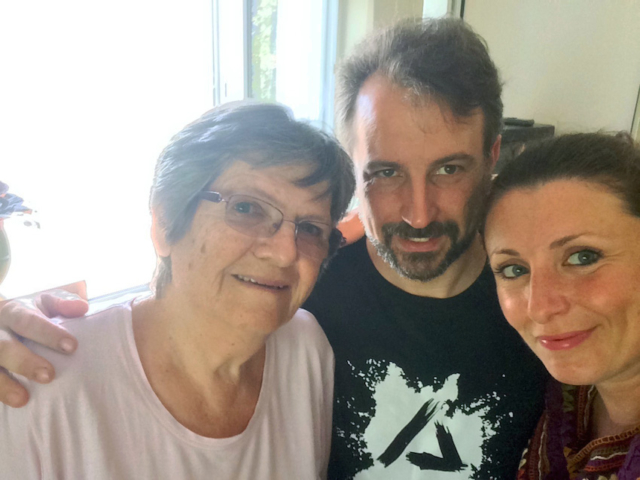 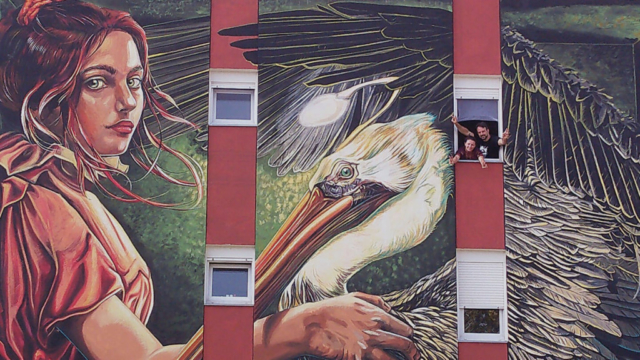 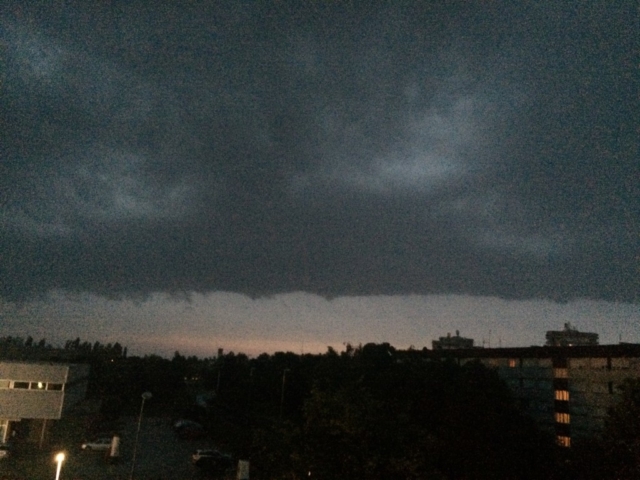 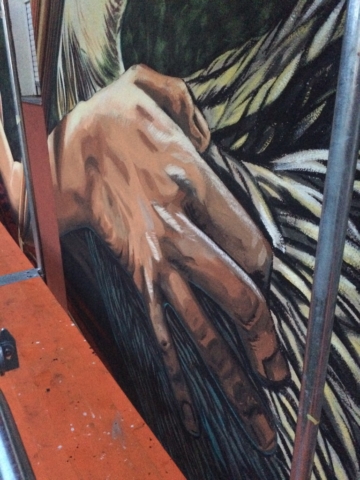 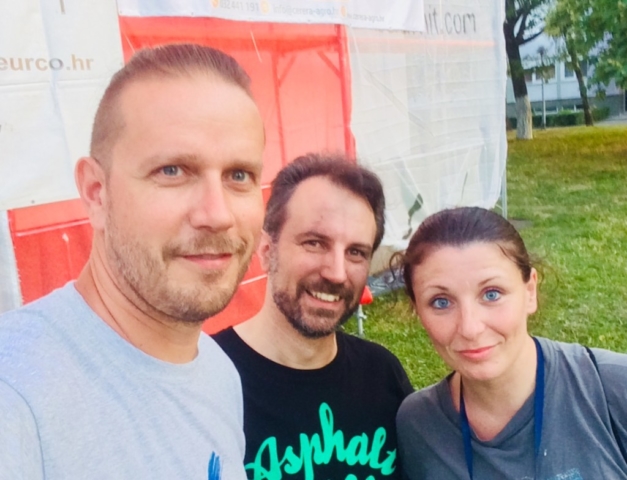 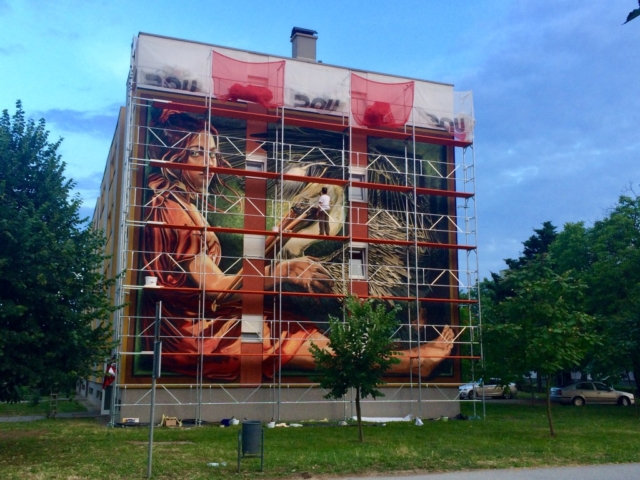 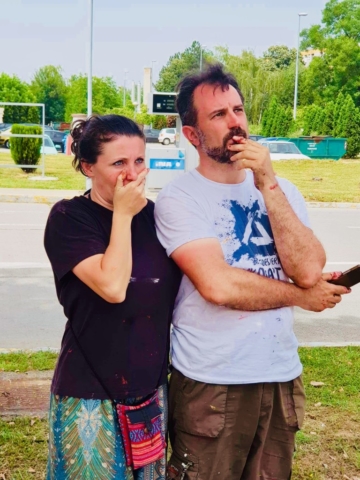 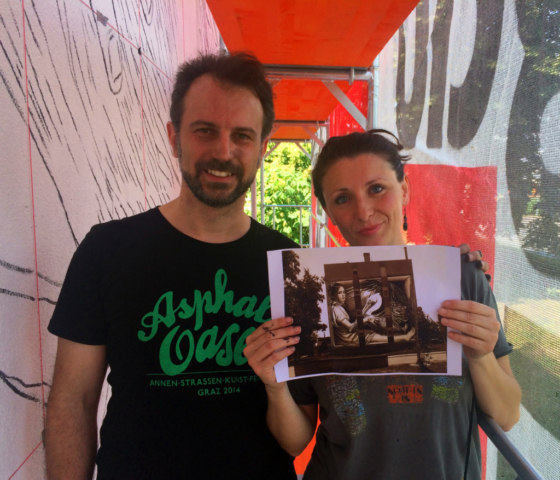 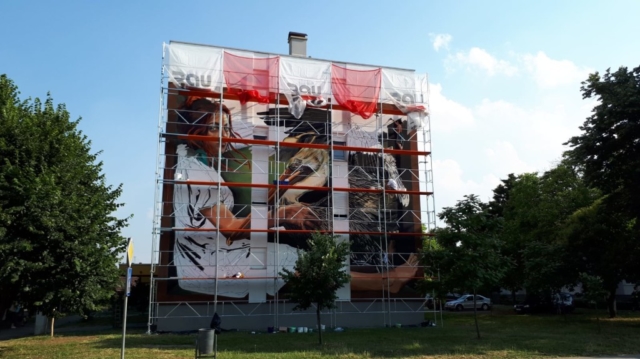 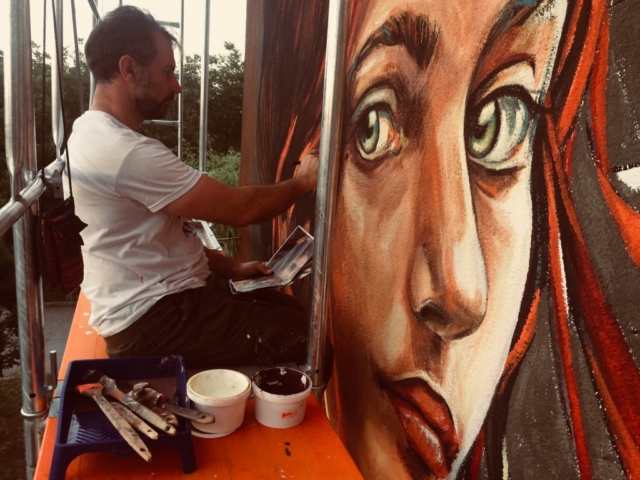 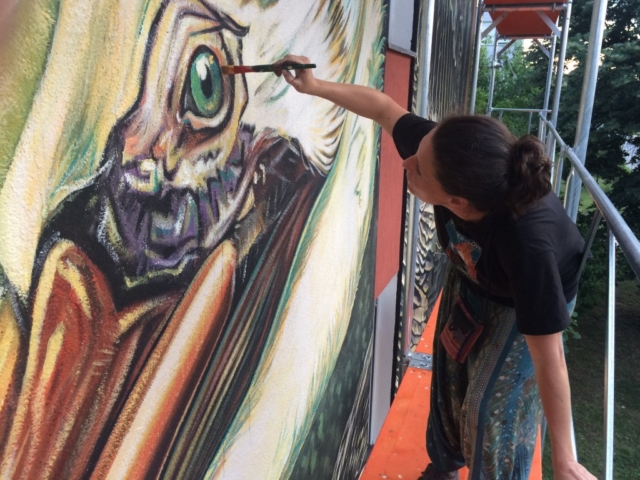 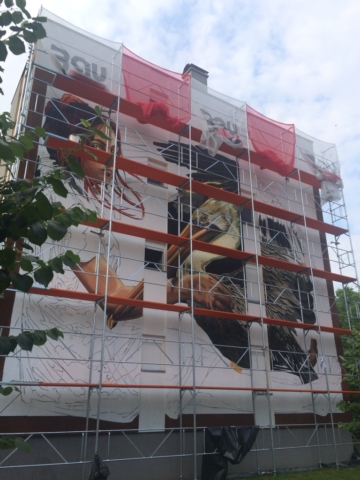 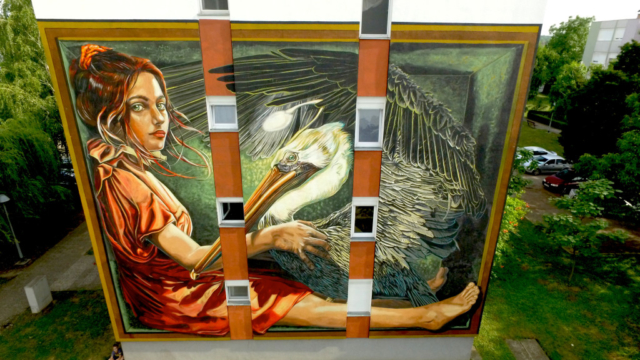 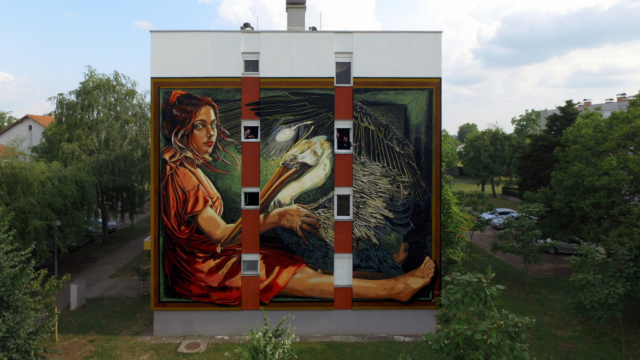 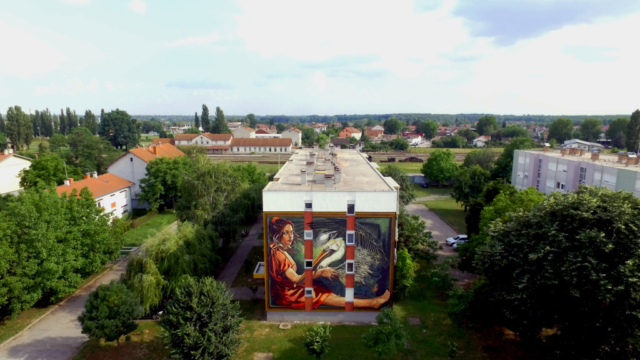 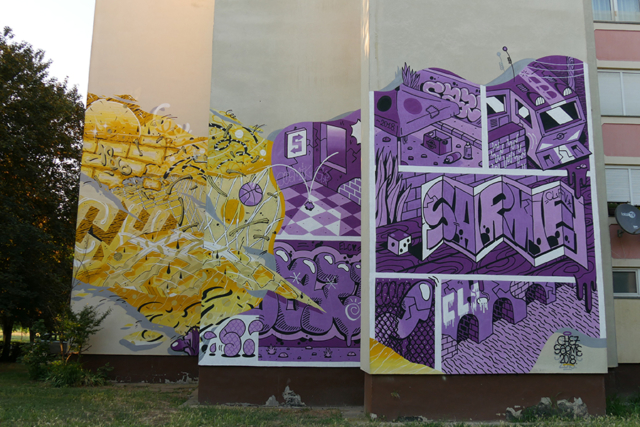 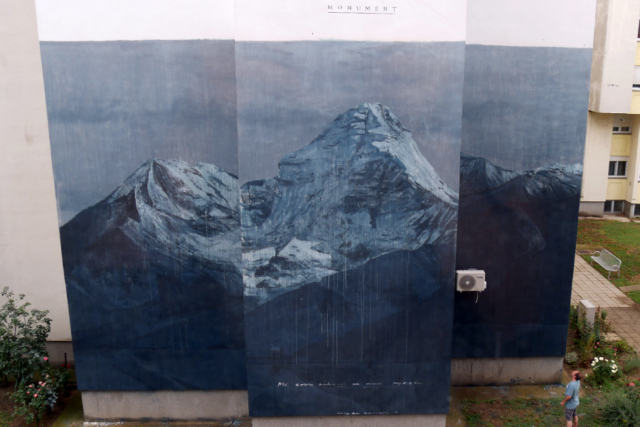 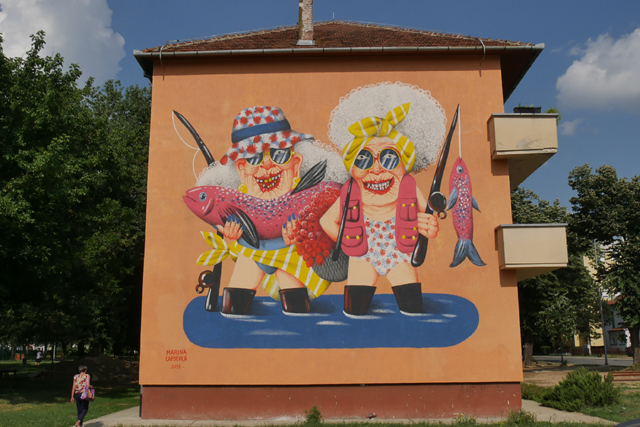 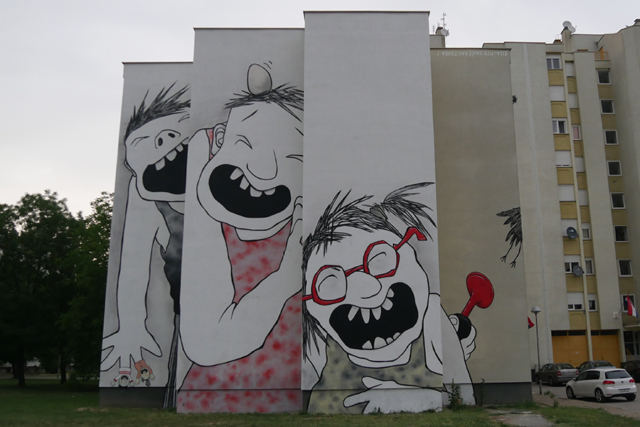 SCABB. Art & Music in love for a special project